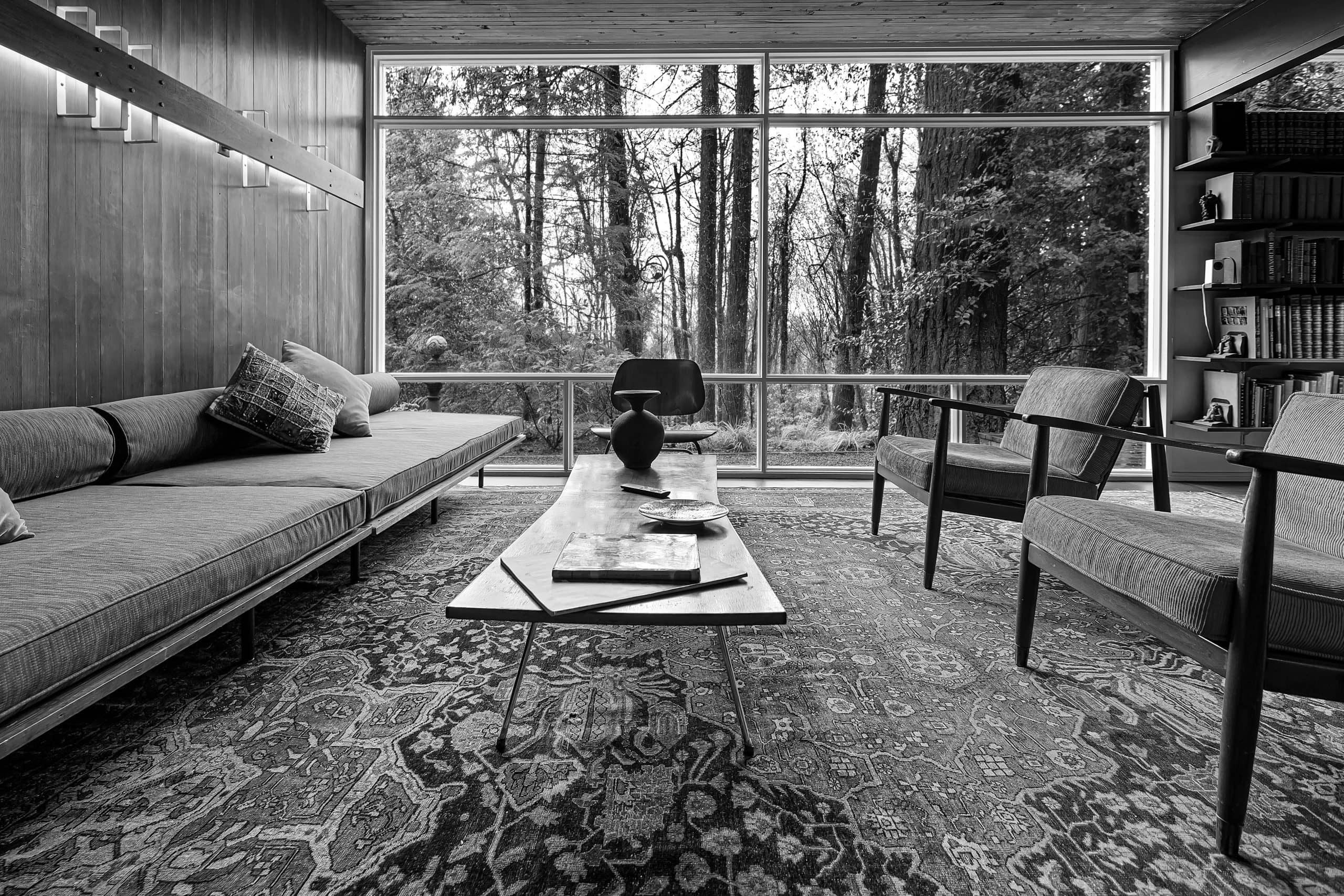 If there’s anyone who knows the work of celebrated Portland architect William Fletcher, it’s his longtime former partner, Dale Farr. At FFA Design, which Fletcher founded and led to more than 50 design awards, Farr was a witness to the last three decades of Fletcher’s career. Recently we sat down with Dale to learn more about his friend and partner. (This interview has been edited for length and clarity).

Could you talk about first working with Bill when you joined forces?

I had my own firm, Farr and Bickerstaff. Bill and Curt Finch, I joined them on a committee because the AIA national Convention was coming to town. So we were on the committee and we’re just we’re talking and, you know, and knowing Bill, going out for drinks, he’d like to have a few drinks. I posed the hypothetical question, ‘What if there was a younger architect who had a small firm but was looking to get in with somebody? We kind of danced around a little bit, and the 1st of January in 1976, I joined the firm.

Fletcher wasn’t just a talented architect, but he was also part of a generation that really helped take the Northwest Modern style to new places, don’t you think?

Yes, he was part of that generation that first settled down in Portland after World War II, along with colleagues like Saul Zaik, Alex Pierce, Don Blair and the 14th Street gang. Bill did one of his best houses with Don Blair in the mid-’50s. Then he went in with another one of his classmates, Curt Finch, started Fletcher Finch Architects in about ’56. They had a natural connection because Finch played trumpet and Fletcher played drums. They actually carried their instruments in the trunks of their cars so they could have a jam anytime. I’m a rock and roll guy, you know. I’ve done a radio show for 40 years on the history of R&B, on KBOO. But when they were young, they got totally into bebop jazz. Dizzy Gillespie was a favorite of Bill’s, and I remember Maynard Ferguson, another trumpet player, was Finch’s favorite. Jazz had an impact on their work, in that it was very simple, very direct and the kind of musical, you know? And, Bill, even though he came across as more the Portland Heights, buttoned-up type, was well known in his younger days for wearing zoot suits: you know, the big colorful jackets, the key chain, all that stuff.

And Bill actually designed Count Basie’s mausoleum, right? His son told me Bill was quite tickled to have that honor.

He the mausoleum work for quite a while when I was there, for sites all over the country. There was one company in Texas that was a repeat client, and there was one in Portland. I remember seeing a group of small mausoleums on a hill that he did in Texas, and it was really impressive. I thought to myself, ‘This looks like something by [Italian midcentury-modern architect] Carlo Scarpa. It was that good.

You would have been a kid in the 1950s when Bill and the 14th Street Gang first came onto the scene, and when this 1953 house was designed. But can you share a little about your impressions of the city back then?

I go back, you know? When I came here as a kid, this whole town was absolutely corrupt. Downtown seemed pretty scary: lots of clubs, bars and stuff. And some of the mayors of that time, like Fred Peterson (1953-56) and Terry Shrunk (1957-73), there seemed to be some payoffs going on. Before them was Dorothy McCullough Lee (1949-53), who came in and kind of cleaned out all the strip bars, prostitution and gambling stuff. But it still went on.

This isn’t a question about Bill Fletcher, but given what a music fan you are—you’ve hosted an R&B radio show on KBOO for 40 years— when you got to your teenage years, who did you see play here?

I was a big R&B fan, and I saw Fats Domino out at this place called the Division Street Corral, out on 171st. James Brown I saw a number of times. I used to go to Williams Avenue every weekend to buy records at these different record stores. I remember seeing a flyer on the post saying Jimmy Reed is playing, but I was still under age. I did get tickets to see Ray Charles in 1960 at the Palais Royale Ballroom at 21st and Burnside, but Ray didn’t show up because his plane was stranded in Seattle and there was a riot.

Well, when Bill did his houses, he did his houses. He’d go into his office and work on them. I’d go into his office occasionally and comment on it, but it was his. Kurt was often the same way. He did a lot of houses. When we did larger projects it would be more collaborative, of course, but Bill loved designing houses especially, and he like to go into his office and think about it for a while, kind of designing it in his mind. Then finally he would start sketching and it would develop quickly from there. Bill and I were similar. I dream about a designs a lot. You start talking to a client, and in your mind you’re designing already. You almost have to force yourself to stop, and get all the information. And Bill had that. He trained himself to listen intently to the client, but he couldn’t wait to start drawing things, and coming up with ideas.

Older architects often talk about drawing as a lost skill in architecture, and it sounds like Bill had a particular talent in this way, which would make sense given his interest in fine art.

His renderings, I mean, we’d bow down to him. He was just a fabulous renderer. Absolutely the best. He’d start with these pencil sketches and kind of have the concept down.

Could you talk about his style with houses? He wasn’t a pure Northwest Modern guy designing houses with pitched roofs and cedar shingles.

When you look at his houses from the 1950s, you see the influence of the International Style, especially Mies [Van Der Rohe]. I think Bill’s house, and other works of his like the Wedgewood House with Donald Blair, look like a miniature Farnsworth house. There’s no doubt these were big influences, along with local architects like Yeon and Belluschi. You could see it in the house I redid a few years ago, the Rule House. He made it a showcase for some the client’s art collection: some great sculptures by Northwest artists like Bonnie Bronson, Lee Kelley. And he was friends with them all. He collected those artists too. After he designed his first house and got divorced, he started working on his own bachelor pad, but then he remarried, so Bill added onto it several times. I remember you’d go through a little glassed-in corridor to the new wing, which gave him an opportunity. Those walls were floor to ceiling with paintings and sculptures and stuff by his friends: Carl Morris, Louis Bunce. I think he did some trades: ‘I’ll sketch this up for you if you let me have that painting.’

Visiting his first completed house in Riverdale, I was impressed by Bill Fletcher’s sense of experimentation. You get those pops of color inside and out, which is delightful. And then there’s the roof. I read an Oregonian article from 1955 that described the house having what was known as a bathtub roof, where you would actually deliberately pool water up there for added insulation. I had never even heard of such a thing. And his children say they never remember Bill or their mother filling the roof with water. But to me it speaks to his passion for trying ideas.

It’s has been proven a totally erroneous, bad thing to do. But it does probably say something about his willingness to try things. And you know, Frank Lloyd Wright was well known for his leaky roofs. The Farnsworth House, which was a favorite of Bill’s is notorious for its leaks and lawsuits. At least you can say that Bill’s house never leaked.

Bill Fletcher obviously had a knack for houses, but when I think of the history of FFA, I think of also these wonderful renovations. I know he ended his career with the Central Library renovation, which was a chance to work on a building that his grandfather had helped found. How did you three partners work together on restoring some of these landmarks.

I mostly did commercial work for developers and high tech, but developers that Bill did work for, they were kind of his buddies. Hal Ayotte oversaw a lot of historic renovation. He and Bill worked together on Crater Lake Lodge, which was really special. And I believe Bill himself designed the redo of Timberline Lodge. On projects like this, compared to houses, Bill was more collaborative. He had to be, because they were more complex projects, and I don’t think Bill liked to go to all those meetings that were necessary for government work. You’ve got a giant committee and everybody gets the vote. He’d say to me, ‘Okay, hell, you go to that meeting and then I’ll work on the design.’ I think he liked that more one-on-one kind of thing. He could speak very eloquently, easily, to groups of people, but that wasn’t his favorite thing. But he did like hanging out with his fellow architects. I don’t know if architects today get together quite like that, at least not in person over martinis like that.

How did Bill’s work evolve over time?

Well, he was rooted in that “less is more” philosophy of Mies, but Bill’s work towards the end actually got more complex. It wasn’t so spare. I remember he did a house for Jim Mark (the CEO of real estate company Melvin Mark) that had kind of Georgian overtones, I would say. I was getting into Postmodernism and did a number of buildings drawing from that style, and I think at first he didn’t like them. But later he became a big fan of [neo-modernist ’80s architect] Hugh Newell Jacobsen [known best for designing the Martha’s Vineyard home of Jacqueline Kennedy Onassis]. Bill would get his copy of Architectural Record, and if there was one of Jacobsen’s houses featured, he’d study it. The plans were always very direct. No wacky stuff, no crazy angles, nothing. It was always nice sequences through the spaces.

It seems to come back to the fact that Bill Fletcher was happiest designing houses.

That was his deal. And he taught me a lot. He’d say, “Think of what it looks like going through a doorway. What do you see way down at the end here? What’s to the side? How do they all relate? They need to all tie together.’”