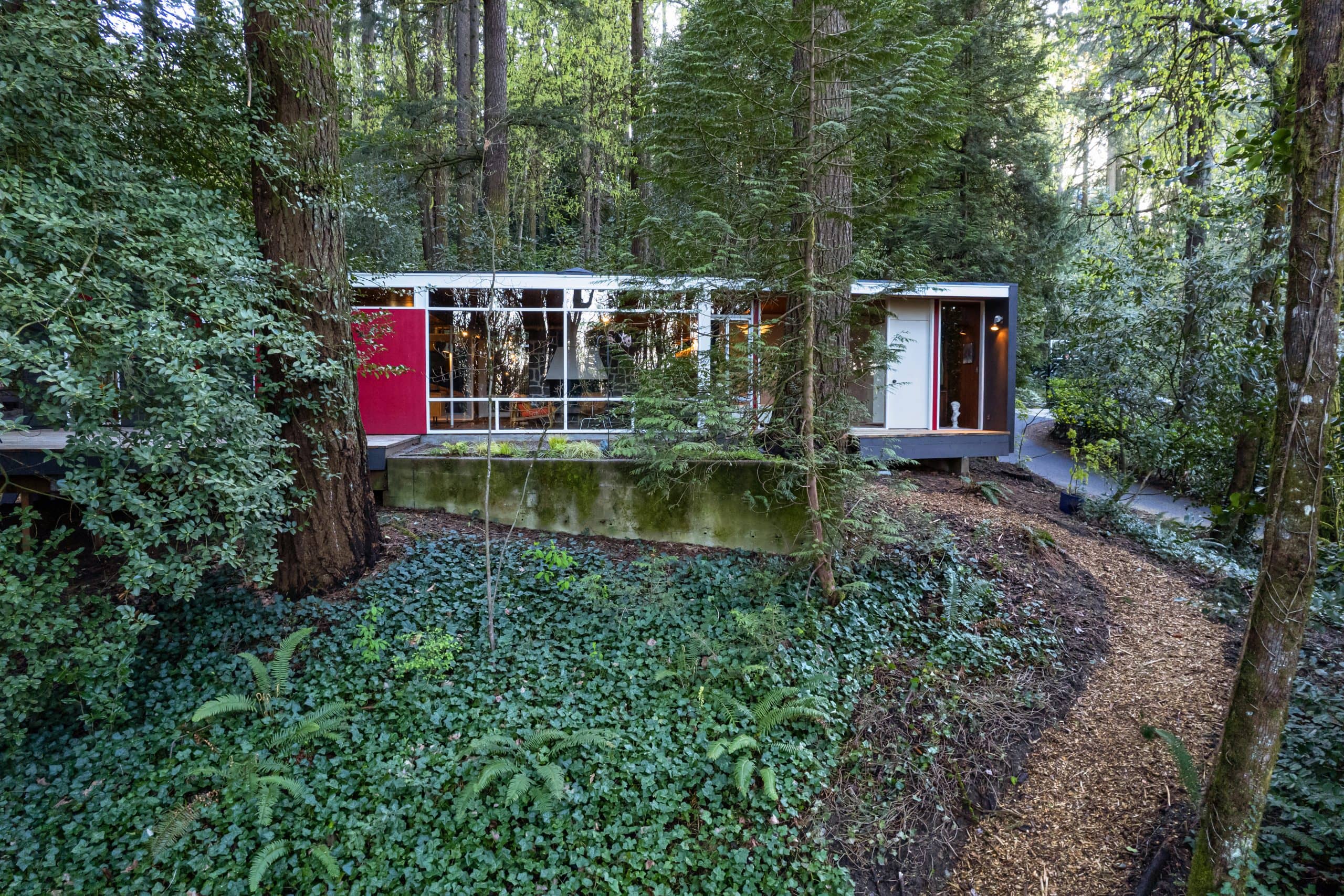 Nestled in the woods of Riverdale between Portland and Lake Oswego is an architectural gem: the first full house designed by William Fletcher, one of Portland’s greatest midcentury modern architects. Since its 1953 completion, the privately owned home has only been accessible to friends and family. The Fletcher Residence was excluded from the 2017 Fletcher designed homes tour, and has never been for sale.

Located on a gently sloping forested site in Dunthorpe, just north of where Portland  gives way to Lake Oswego, the three-bedroom, 2293-square-foot house was an instant  classic. Floor-to-ceiling glass windows with stunning views of the forest, it has surprising  pops of color and handsome wood craftsmanship. The home is a significant work of midcentury modern architecture on a spectacular wooded site. Fletcher’s unique ability  to bring the outside in and the inside out through extended lines of sight created a  timeless, rich and warm architectural delight.

The Fletcher Residence was Fletcher’s first private residence and first completed design three years after his graduation from the University of Oregon. Its design immediately  attracted attention. In an Oregonian feature, reporter Bill Logan noted that an architect designing his own house accomplishes, “a rigidly self-imposed test of achievement… akin to the attorney who writes his own will and the plastic surgeon who straightens his own nose.” The soundness of his plan was confirmed when Fletcher’s design won an award from the local American Institute of Architects chapter. After the AIA article was published, Fletcher’s design received an award from Architectural Record magazine.

The house at first glance appears influenced by International Style architecture more than the emerging Northwest regional modernism that Fletcher’s future houses would come to exemplify. Instead of the common pitched roof with large overhangs, it’s a flat roof. The home’s wood-festooned interior provides a backdrop framing the views of the surrounding forest reflecting the influence of pioneering Oregon architects like Pietro  Belluschi and John Yeon on Fletcher’s body of work.

William Fletcher had deep roots in the area and came from a venerable Portland family. His grandfather, Morris Fechheimer (1844-1886), was a prominent attorney who arrived  in Portland via San Francisco. A colleague of US District Court Judge Matthew Deady, Fechheimer served on the Riverview Cemetery commission and made important contributions towards the establishment of the Multnomah Public Library. He built a mansion on the Portland’s west side in the South Park Blocks, unfortunately now gone. Fechheimer commissioned one of the city’s finest works of cast-iron architecture (for which Portland was famed): the landmark Fechheimer & White Building on Naito  Parkway, which remains standing today.

Morris Fechheimer’s son (and the architect’s father), William Blackstone Fletcher  (1875-1948), enjoyed an adventurous youth. He played quarterback for the Multnomah Athletic Club football team that memorably beat the University of Oregon in the 1890s, and prospected for gold in Alaska. William Blackstone became a successful  businessman, owning considerable real estate in Portland, including property along the Willamette River south of the current Sellwood Bridge, a portion of which was donated  (along with land from Alfred Powers) to become Powers Marine Park. William  Blackstone Fletcher was a civic leader in the early days of the automobile, serving on a commission that helped birth the Columbia River Highway (now the Columbia Gorge  Scenic Highway) between Troutdale and The Dalles. Following World War I, in a time of  anti-German sentiment, he changed the family name from Fechheimer to Fletcher.

In the early 1920s William Blackstone married Amy LaVenture of Davenport Iowa. That  same year his son, the future architect William LaVenture Fletcher, was born. In 1925, William Blackstone and Amy Fletcher built a mansion on the family property in  Riverdale, which still stands. The property was bordered on its west side by the original road between Portland and Oswego. Young Bill Fletcher attended Riverdale Grade  School and Lincoln High School. He was always interested in art and jazz, and played drums in grade school.

In 1943, with World War II raging, Bill enlisted in the U.S. Army immediately after graduating from high school. He was aboard a troop ship about to leave New York for  Europe but was pulled off the transport. Without his knowledge, Bill’s father had pulled  strings to send him to officer-candidate school, thereby avoiding combat. The Army sent  him to attend Cornell University, where he earned a specialized military-math degree created in accordance with the Defense Department. While at Cornell, Bill met his future  first wife, Joyce Lee of Rochester, New York. After their marriage, the couple moved  back to Oregon, where Bill earned an architecture degree from the University of Oregon while Joyce pursued photography and painting. When Bill’s father died in 1948, Bill  inherited a portion of the estate he grew up on. Given a choice of lots, it was Joyce who selected the site where Bill’s first design was built.

Bill Fletcher became an enthusiastic art collector, avid supporter and friend to many of Portland’s most progressive artists, including Carl and Hilda Morris, Louis Bunce, Tom Hardy, Lee Kelly, and Lucinda Parker. He played an active role on the Oregon Arts  Commission. Fletcher was an amateur jazz drummer all his life, and in the late ‘40s  often played gigs with the local Gene Zeronus band at various clubs and hotels. His architecture was said to possess an inherent sense of rhythm influenced by his love of music.

After graduating in 1950 and returning to Portland, Bill Fletcher briefly worked for a local architect designing mausoleums, including one for River View Cemetery just north of the family’s property, for which Morris Fechheimer had been a founding trustee. An enthusiastic jazz fan, Fletcher designed a mausoleum outside New York City that, to his great honor, eventually became the final resting place of the legendary bandleader Count Basie.

In the early 1950s, the young designer set out on his own, founding the sole  proprietorship William Fletcher Architect from the basement of this house. As business expanded he moved his office to downtown Portland and became part of the 14th Street Gang, a group of young architects sharing an old Victorian house at SW 14th and Columbia. Though each was operating independently at first, the group, including Saul  Zaik, Donald Blair, John Reese, Alex Pierce, Curt Finch and interior designer George  Schwartz, collaborated and influenced each other. Schwartz became an interior design consultant to Fletcher’s 1953 house that’s now for sale. Together these architects formed the second generation of Northwest Modern residential architecture that began with Yeon and Belluschi in the late 1930s. Over the course of the ‘50s and ‘60s, Fletcher designed a succession of acclaimed modern homes: the Goldsmith residence, the Saltzman residence, and the Gray House. Eventually, the architects began to collaborate and grow their practices. Finch became Fletcher’s partner, in Fletcher Finch  Architects. Later Dale Farr and Hal Ayotte joined the firm, currently operating as FFA Architecture & Interiors.

Fletcher’s expertise grew in residential and commercial design. His firm designed award-winning commercial buildings, and were responsible for a number of high-profile  historic restorations, including the Crater Lake National Park Lodge, as well as the  sweeping 1997 upgrade of Portland’s Central Library, where Fletcher’s grandfather had been one of its founders.

Although this residence was not technically Bill Fletcher’s first design—back in college, he’d built a single-room accessory dwelling for himself and Joyce in a friend’s backyard —it was his first truly completed home.

Outside the home’s entrance, a small courtyard-like space shows Fletcher’s appreciation for Japanese architecture. After passing through the front door and a small  foyer, there is one big open space. The kitchen and dining area at the front of the house give way to a living room with a wall of glass, providing picturesque views through the forest looking east, ideal for greeting the sunrise. An inviting sofa beckons a nap in a location and environment the owner’s family describe as, “the best thing in the world.” As the corner of the south wall is essentially a wall of glass, the view from the sofa  allows one to look through the trees in two directions. While the great room is one big  open space, Fletcher’s visionary design comes through in its flexibility and flow. The room feels expansive when hosting a group, yet can seem cozy and intimate when it’s just one or two people.

The unique Fletcher designed and built fireplace features a distinctive insulated-metal hood and Rocky Butte-quarried basalt wall. The fireplace divides the living room and kitchen, while a small reading nook and wall of bookshelves forming one edge of the living room creates a pleasing intimate corner of the room. The interior stone is juxtaposed against the home’s original cork flooring as well as its interior wood, including not only walls but ceilings clad in Douglas fir.

A few years after it was first completed, Fletcher expanded the home to give his growing family more space, adding a primary bedroom and bath along the north side of the home, just beyond the kitchen. This location gives the primary a greater sense of  privacy, away from the other bedrooms along the south side of the house.

Fletcher employed numerous unique touches to the outside of the home. Notably the roof construction designed with 2x6s on their side which makes for a robust base and uncommon visual interest – an installation application and ethos to build for a lifetime.

The home’s most distinctive feature may indeed be its pops of color. Fletcher showed  his wide ranging interest in the visual arts by using the façade and interior surfaces as opportunities to introduce vibrant hues. The exterior colored panels provide a contrast to the dark stained cedar siding. The interior pops of color break up the natural wood with a subtle irreverence.

Perhaps most delightful of all is the experience of being on the back deck. In true conservationist fashion, Fletcher made a point of preserving the many towering Douglas firs on the property, and one even stands just a few feet from the glass wall of the primary bedroom. The view from here through the woods, as Fletcher and grandfather Morris Fechheimer understood when he bought the property, is essential to what makes  this home special. It’s a quintessentially Northwest modern house, and it’s something more: a design that touches the soul.