Ode to a Douglas Fir 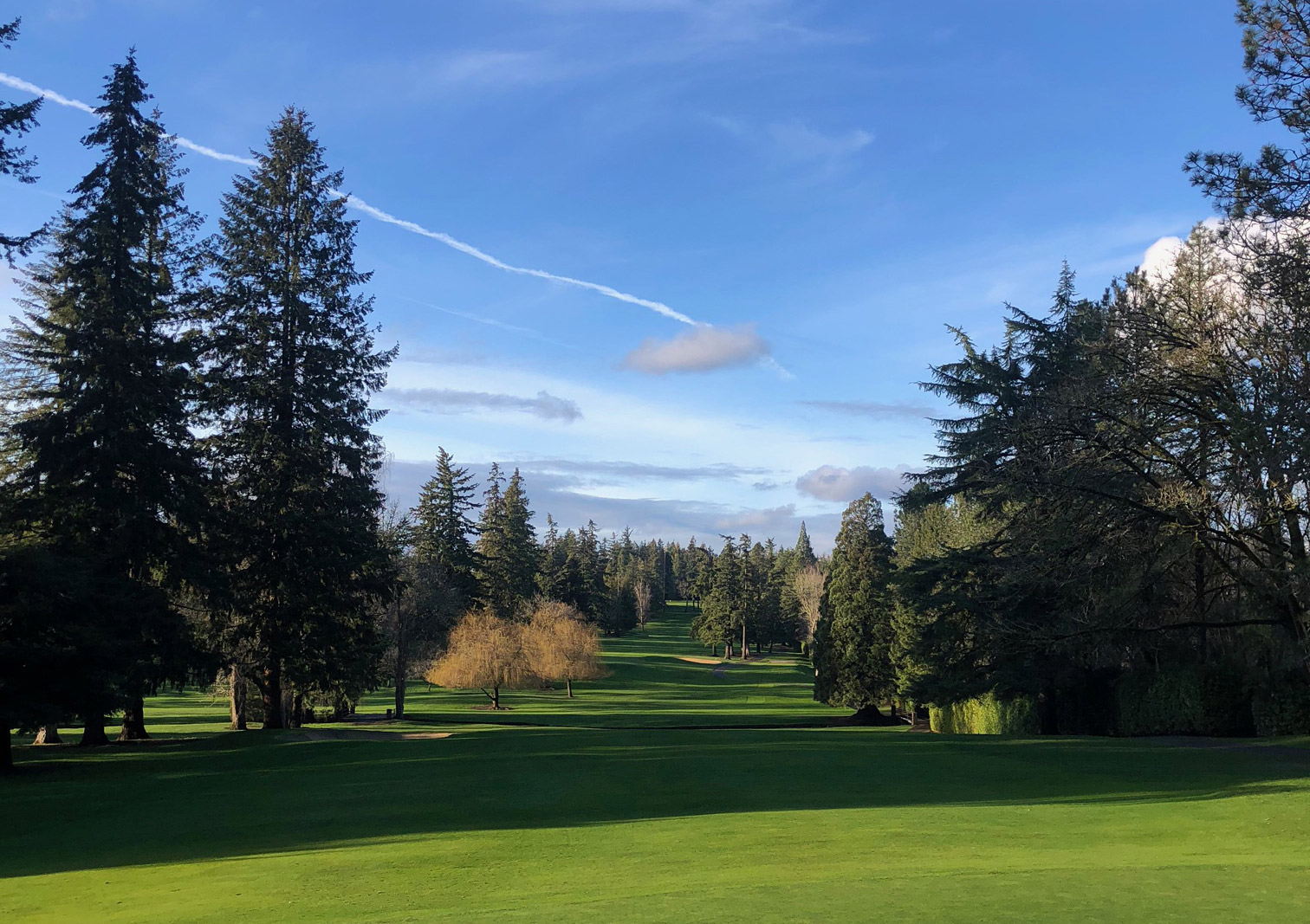 Put me in a westbound car crossing the Ross Island Bridge on a gray day, and stirring inside me is a sudden craving for buzzing wrensong and wood smoke. This mood board is embedded in my basal ganglia; interspersed with modern relics of the Anthropocene, I see fog clinging to the fir-clad weald of the West Hills (née Tualatin Mountains) and a part of me is transported to the earliest images of Portland: a clearing scattered with hardscrabble conifers and ramshackle storefronts, wooden sidewalks and wagon tracks in black mud, a brazen attempt to conquer the wilds. The Douglas fir is an ever-presence here, then and now, and from tip to toe I love this tree.

In its ubiquity, the Douglas fir has come to symbolize our regional identity. It is Oregon’s state tree, of course; it also stands as the crest of the flag of Cascadia, and along with liquor and railroads, it built the fortunes of our city’s early barony. I’d go so far as to say that without Douglas fir’s abundance here, Portland could scarcely have come into existence.

It has always vexed me that for such an important species, the Douglas fir has been so mired in taxonomic and nomenclatural morass. The tree had never ceased to awe early explorers of the Great Northwest, though naming the tree has persistently stymied the botanists they brought along. It has been unfairly treated as some kind of botanical bastard.

Though it has been slotted in the pine family, it is no pine, as one early name, “Oregon pine,” would indicate. Both its scientific name, Pseudotsuga, and its common name, Douglas fir (or Douglas-fir, as I learned as a forestry student), both imply that it is masquerading as something it isn’t. It is no fir at all; rather, it is evidently a false (pseudo) hemlock (Tsuga).

When British botanist Archibald Menzies sent the first specimens from Vancouver, British Columbia, back to England in 1792, he apparently didn’t even take a stab at naming it. Upon studying Menzies’ specimen a decade later, British conifer expert Aylmer Bourke Lambert called it Pinus taxifolia, guessing it was a true pine (Pinus) but seeing a resemblance to the needles of a yew tree (Taxus). This turned out to be a redundancy, as another species had already claimed that name. Two years later, yet another botanist suggested it was a true fir (Abies taxifolia), but this, too, was discovered to be a homonym for another yew-leaved fir.

David Douglas, for whom the tree is partly named, deigned to call the species Pinus douglasii, confusing it for a pine even while comparing its growth habit to that of a fir. Though he may have gotten the name wrong, during his botanical expeditions of our region between 1823 and 1827, Douglas correctly noted that the sight of a lone specimen was “one of the most striking and truly graceful objects in Nature.”

On more than one occasion in his notes, David Douglas also pitted his namesake tree to “the well-known Larch,” a tree whose popularity and importance he seems to have vastly overestimated. Compared to that of the larch, Douglas was not impressed by Douglas fir’s charcoal output. (At a time when coal was a primary fuel source, this would have been a salient observation.) The straight grain and tight rings of Doug fir’s wood drew further comparison to larch, but “[w]hether it will prove durable or not remains yet to be known,” he wrote, in the understatement of the century.

I have news for Mr. Douglas: it is durable. My house, just seven blocks from Lone Fir Cemetery, was built in 1892 — 30 years after the cemetery was officially named for the no-longer-lone (but still striking and truly graceful) Douglas fir growing near its northern edge. That my old farmhouse is standing steadily after all this time is a testament to the fact that it was hewn from the stately tree. Though there’s visible borer beetle damage in its floorboards and it leans jauntily in places, it is a strong house built from broad, old trees that were likely felled from around the neighborhood.

David Douglas didn’t have much nice to say about Douglas fir’s bark, calling it “rough, rotten, and corky” and that when it sloughs off in large sheets that it resembles a sheepskin. Had Mr. Douglas spent some time allowing his glance to rest for a moment in the deep fissures of the thick, sturdy bark, he’d have seen they contain multitudes. There is a whole microcosm in the moss and lichen (which do grow in proliferation on the north side of the Lone Fir Cemetery’s eponymous tree), including the irascible tardigrade (also known as a water bear or a moss piglet), a microscopic eight-legged animal that can survive outer space and probably the apocalypse.

Beneath that bark is the phloem, whence the fruits of photosynthesis — the tree’s thin syrup-blood — flows. The sap of the kindly Douglas fir is magically converted to manna when the tree is attacked by aphids, turning the other cheek, if you will, as a rare sugar called melezitose, which crystallizes a pale gold on twigs and needles during summer droughts. This was relished by native people who put it up (along with sticky-sweet roasted camas bulbs) for winter snacking.

Across the West, indigenous people found the tree useful year-round, and not just for its sugar or its Big Timber Energy. Yes, the wood was used for homes, fuel, and tools, but the flexible branches also suited it to snowshoe frames and the construction of airy summer homes; the pitch was effective for caulking canoes and enjoyed as a chicle-type chewing gum. The char from burnt twigs could be mixed with fat and smeared as a healing balm against rheumatism and other joint complaints. The needles could be steeped into medicinal tea to staunch heavy menstrual flow or stuffed into slippers to keep feet funk-free.

The thin bark of young branches is studded with tiny bubbles filled with aromatic resins. As the sprouts of childhood gave way to the shoots of adolescence, the tree helped usher girls and boys into their budding bodies. Brushing bare skin with the softly bristled branches was a purification rite, bringing good luck and keeping skin supple and clean-smelling as the musk of maturity settled on them. The slender young growth, peeled and chewed, sweetened breath for first kisses.

The buds of Douglas fir point out from the tips of their branches like tiny, proud finials, then swell to bursting in the spring to reveal velvety, peridot-green needles that is distilled by local folks into a most exquisite eau de vie redolent of fernbrake-faeries and ancient forest magicks.

All children of the Northwest grow up knowing that the bracts on a Douglas fir’s cones are actually the feet and tails of mice hiding from a forest fire. For generations, this story has been passed around camp circles and nature classes as a “Native American legend,” but so far has not been attributed to any specific indigenous people.

Among and within their roots lies the wood-wide web; a network of mycorrhizal life 500 million years old as vast and complex as the above-ground world. The fungi that encase the fine root hairs of Douglas fir connect with those of dozens of other species, playing a game of telephone that allows the forest to act as a nursery to young seedlings as they germinate and grow into saplings. These networks allow Douglas firs to behave in a way that can only be described as altruism; to share resources with its cohorts and allowing them to warn each other of danger through chemical pathways, allowing their neighboring ponderosa pine, for example, to step up defenses through increasing production of enzymes to gum up the mouth of a chomping budworm. (This is what I like to call “getting hyphae.”)

What has the not-so-lone fir of Lone Fir Cemetery seen in its centuries, with its mossy cosmos of bark, its intoxicating foliage, its mouse-fringed cones? With whom has it connected, and who has it protected, in the fungal underland where its roots dwell?